Morocco, a melting pot of dynasties and cultures :

Each country has its own history: historical facts, events and important milestones that gave the country its true historical value. The history of a country is one of the events considered worthy of remembrance, which perfectly applies to Morocco. With several dynasties that have succeeded one another over the years: the Idrisside dynasty, the Almoravid dynasty, the Almohad dynasty, the Merinid dynasty, the Saadian dynasty and the Alaouite dynasty, Morocco has gained international consideration as a multicultural country, with several types of heritage recognized as World Heritage by UNESCO. Morocco is one of the go-to destinations for discovery lovers, the most fascinated by nature, history, the art of living and Moroccan hospitality. The experience gained during their journeys in Morocco leave them pleasantly satisfied with their stay.

The Idrisside dynasty was the first to conquer Morocco for more than a century. Its founder was Idriss the 1st famous for making Volubilis (Walili) his capital. From 789 to 978, the Idrisside dynasty dominated much of the Maghreb, including the North Africa of the current Morocco. Being the founder of the first royal dynasty in Morocco, the Idrissides were able to build new cities including Fez, which became afterwards the capital after Volubilis during the reign of the son Idriss II and his successors. Several monuments are evidence of the architectural and religious works of this dynasty, such as the Al-Qarawiyin Mosque, which is one of the most important mosques in Morocco and whose architecture is an outstanding artistic masterpiece. After several years of reign, the dynasty fell to the Almoravids. 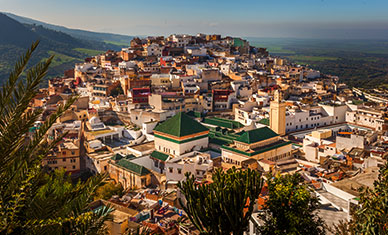 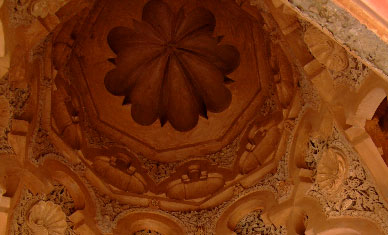 After the Idrissides, a new dynasty began reigning over the country and obtained shares of the Maghreb soil : the Almoravids. Destroying the African reign before attacking the north, the Almoravids founded Marrakech in 1062. They managed to reign over the whole Maghreb and Al-Andalus and named Marrakech as their capital. This unprecedented accomplishment was followed by the second imperial city which became the centre of trade and a bridge between sub-Saharan Africa and the Maghreb. Among the religious artefacts that has been built there, mosques such as the Koutoubia mosque, whose construction began during the Almoravid reign, Koranic medersas, ramparts and palaces. In addition, they also built an irrigation centre to provide water for the entire region.

The Almohads won over the Almoravid dynasty in conquering Morocco. Guided at first by Îbn Toumert, the Almohads declared war against the Almoravids under religious pretext. Their Arabic name, implying the uniqueness "Attawhid", was the object of their proclamation. The architecture and culture - the two key pillars of this dynasty - are still embeded in the emblematic monuments of the city of Marrakech, the Almohad capital, through the redesign of the Koutoubia mosque, whose architecture is inspired from Giralda in Seville. The Almohad dynasty reigned thus for half a century and faded away following a defeat against the Christians in 1212. 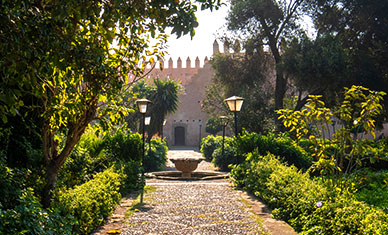 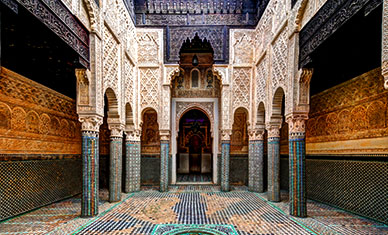 Founded by the Amazigh Chief Abou Yahia, with Fez as its capital, the Merinid dynasty overthrew the Almohads by driving them out of the Maghreb. Their reign didn’t last long, the Merinids were defeated by the Portuguese who attacked the coast through Ceuta and the Strait of Gilbraltar. Motivated by the transmission of religious values, the Merinids built several Zaouias, mosques and Koranic medersas such as the one in Salé. Several achievements and foundations symbolize this dynasty, the decorations in wood and stucco, roofs with glazed tiles, glazed ceramics, etc. The necropolis of Chellah, located in Rabat, contains vestiges that best represents the wealth of this dynasty in terms of culture, history, architecture and religious institutions.

The Saadian dynasty had overthrown the Merinids and initially had Fez as its capital before winning Marrakech. They had declared war against the Portuguese and recovered several cities including the city of Agadir. The Saadians took Spain as their ally to protect themselves against Turkish threats. During the reign of the Saadians, Morocco experienced several years of glory which was demonstrated through culture, knowledge and wealth. The Saadians had endowed themselves with the gold of Sudan after defeating the African Empire of Songhai. They channelled their exploits by building several artistic artefacts. In Fez, they built the Borjs and gave a rejuvenation to the Al Qarawiyine mosque. In Marrakech, they built the tombs of the Saadians, the Ben Youssef medersa and the El Badiî Palace. 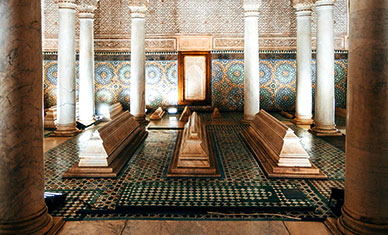 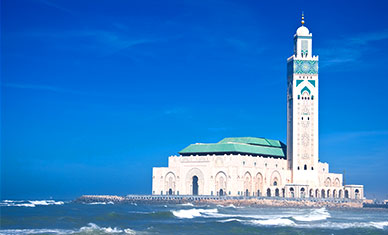 The Saadians were dethroned by the Alaouite dynasty. Originating from Tafilalt, the Alaouite dynasty drove out the Saadians for the sake of power. After taking Fez as a capital, itw as up to Meknes under the reign of Sultan Moulay Ismail, the finally to Rabat, which has been the current capital of Morocco since 1912. Thanks to this dynasty, the city of Fez was rejuvenates, embellishing the whole city and creating protective walls such as the famous Bab El-Mansour gate. The dynasty continued its reign until today. Muhammad VI is the twenty-third ruler of this succession, ensuring the unification of the Kingdom and the transmission of all religious values.